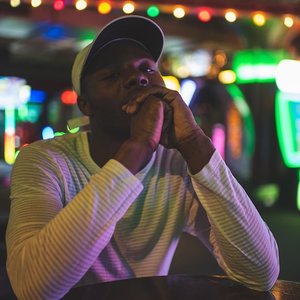 Kwaku Sarpong Adu-Gyamfi, is a Ghanaian-American rapper, singer, songwriter, record producer, and dancer from Boston. Also known as Q, Kwaku was first inspired to dance in his early childhood by the “King of Pop” Michael Jackson.

After falling in love with dance, he soon became a local sensation, performing at talent shows and competitions with his natural break dancing style. Eventually, his undying passion for music led him to teach himself how to sing, rap, and write songs. With encouragement from friends and family, his popularity began to rise, giving birth to the QCREW.

Born in Newton, Massachusetts, Kwaku spent the majority of his childhood moving from town to town- as well as- out of state and country. Luckily, his passion for music and dance connected him with people wherever he went. This forces him to grow and adapt, especially during his time as a student at St.John’s University. With catchy songs & a versatile sound, Kwaku allows his honest storytelling to share not only his own stories but those looking for a voice. Fusing his unique background with his creativity, originality, and strong songwriting ability, he is well on his way to making a big impact in the entertainment world. Repping Beantown and Queens, NY, St.John’s University alum, KWAKU, will soon be a household name. Be sure to connect with the artist on all social media outlets and digital music platforms.